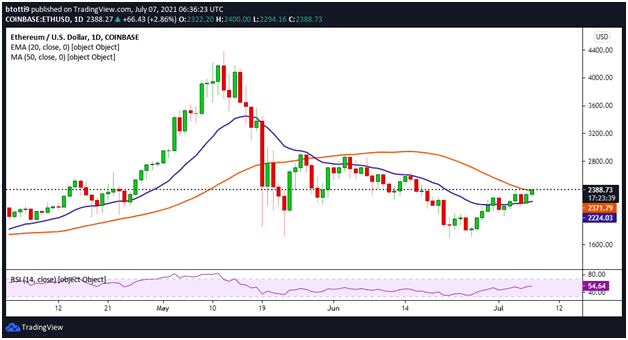 Ethereum’s price has tested the $2,400 resistance level for the first time since 17 June. Ether traded as high as $2,406 on the Bitstamp exchange and $2,400 on Coinbase during early morning deals on Wednesday, with price aggregating site CoinGecko putting the cryptocurrency’s 24-hour gains at 3.4% as of Wednesday, 7 July at 07:00 UTC.

Elsewhere, the crypto market has seen some uptick this week, with Bitcoin price edging above $34,700. Other than ETH, altcoins such as Binance Coin (BNB), Cardano (ADA) and Polkadot (DOT) have also all shown impressive moves to break above recent bogey price levels.

ETH price has been on the uptrend for the past few days, charting alongside a bullish trendline since touching lows of $1,750 on 26 June. The digital asset’s price against the US dollar is up 10.5% this past week and could break higher given the positive sentiment currently nudging it north.

This will happen if bulls maintain the resilience that saw them battle sell-off pressure to break above the $2.000 level after last month’s downturn.

The rebound to highs of $2,400 could invigorate buyers and see them attempt to breach the supply wall at around $2,500. The scenario could see bulls target $3,000 or more over the next few days, although that could depend on whether bulls can hold ETH/USD above the 20-day exponential moving average ($2,224) and the 50-day moving average ($2,371), as shown in the chart below.

Looking at the network, active addresses have been increasing while on-exchange supply drops to levels seen in 2018.

Meanwhile, the countdown to the 4 August, 2021 activation of the highly anticipated London upgrade is on. According to one of the lead developers on the network, London will go live roughly at block 12,965,000.

The EIP-1559 update could see ETH become a deflationary asset as fee burns and reduced supply cuts total issuance. If sell pressure falls as the hard fork approaches, ETH prices might do another rally.

Quests along the Road to Devcon

Ethereum for the Next Billion: Announcing the EF Fellowship Program