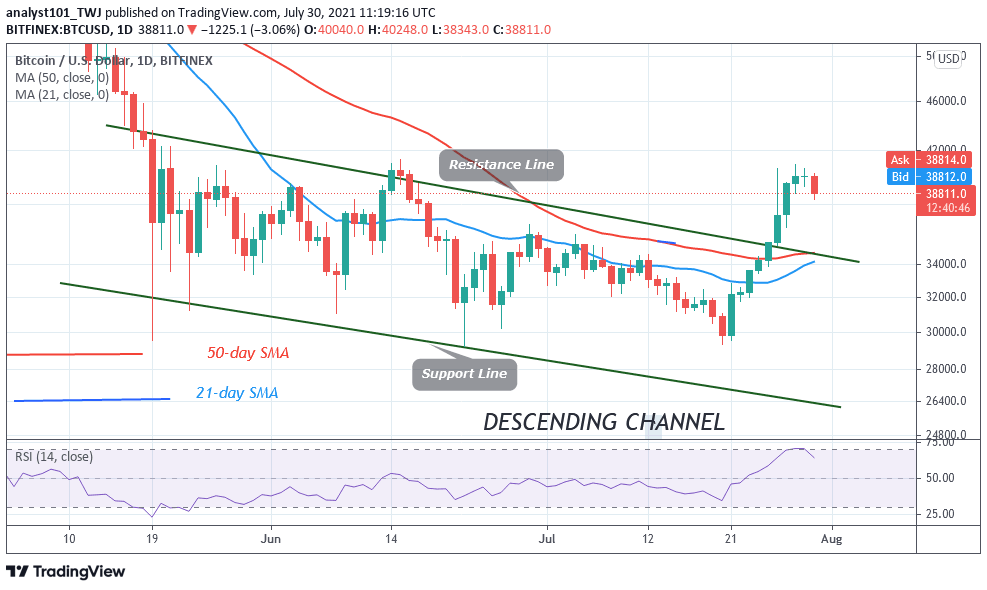 On July 28, BTC/USD rallied to $40,900 high as Bitcoin resumes uptrend. The bulls could not sustain the bullish momentum above the $40,000 high. For the past three days, Bitcoin has been consolidating below the psychological price level.

Today, BTC price is retracing as bulls fail to sustain above the overhead resistance. The retracement has subsided as the crypto found support above $38,000.

Today, Bitcoin’s (BTC) price has retraced to the support above $38,000 as buyers failed to sustain the current bullish momentum above the $40,000 psychological price level. Bitcoin will resume the second round of upside momentum above $40,000 high if buyers clear the resistance zones between $40,000 and $42,451 high.

Bitcoin bulls are now struggling above the current support to resume an upward move.

In the first instance, BTC/USD fell after the price rallied to an overbought region at $40,900. Nonetheless, if the crypto faces rejection at the overhead resistance, Bitcoin will plunge to $36,600 low. In the meantime, BTC prices are fluctuating between $38,000 and $40,000 price levels. On the upside, if Bitcoin has a strong rebound above the current support, the resistances zones between $40,000 and $42,451 will be breached.

However, BTC’s price hovers around $40,000 resistance just in two days. Nevertheless, with the price action and indicators, Bitcoin may stick to its ongoing price range of $30,000–$40,000 mark. Meanwhile, CNBC surveyed a group of portfolio managers and equity strategists.

From the survey, 44% of the respondents indicated that BTC’s price would decline below $30,000. The other 56% of investors believe that Bitcoin would be bullish. In the last respondents, 6% wanted Bitcoin to reach the $65,000 all-time high.

Nevertheless, BTC/USD has remained bullish after retracing to $38,000 support as Bitcoin resumes an uptrend.

Buyers are likely to retest the $40,000 psychological price level. Meanwhile, on July 26 uptrend; a retraced candle body tested the 78.6% Fibonacci retracement level. The retracement indicates that Bitcoin will rise but reverse at level 1.272 Fibonacci extension or level $43,607.60.