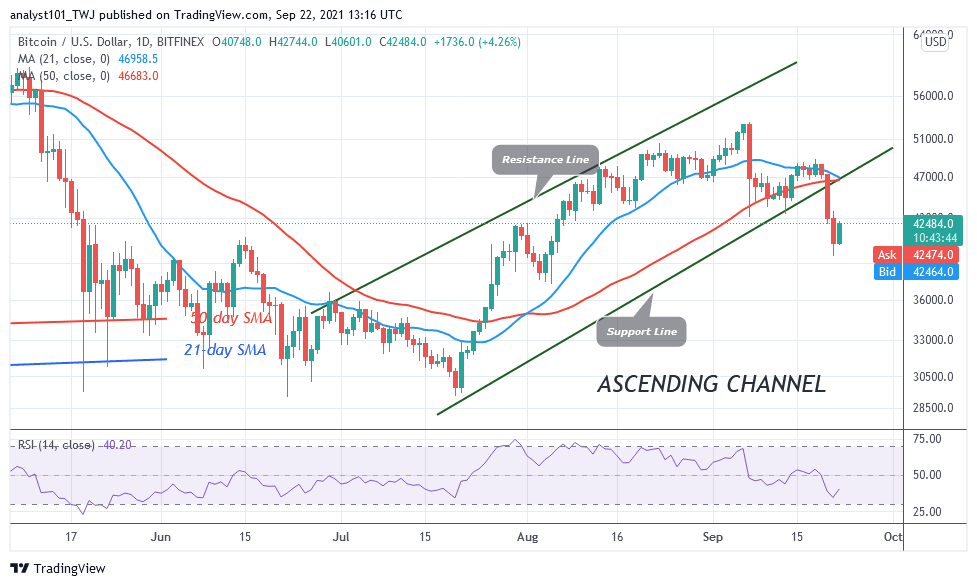 Bitcoin bulls have resumed an upward move as the $40,000 psychological price level holds. From every indication, sellers are more advantageous than buyers as Bitcoin falls in the bearish trend zone. Firstly, the bears broke the previous low of $43,220 as the coin fell to the low of $40,255. Sellers attempted twice to breach the $40,000 support but the bulls bought the dips. On the downside, if the bears break the $40,000 support, BTC price will fall to $36,000 Low. Subsequently, the market will decline to $30,500 low. Conversely, if the bulls defend the $40,000 support and price rebounds, buyers will attempt to push the crypto to the $50,000 high.

Bitcoin Falls Below $40,000 and Bounces Back, Creating “Extreme Fear”

From the price action, BTC’s price has slumped below $40,000 for the first time in six weeks. Immediately, the crypto bounced back to the previous price level. Some analysts believe that Bitcoin is ordained for six figures if the current support at $40,000 holds. Other analysts believe that the bear cycle is imminent. Presently, Bitcoin has recovered as it trades above $42,000 high. According to the Crypto Fear and Greed Index, the bearish price action has coincided with sentiments of “extreme fear” across the market. The metric has signaled an “extreme greed” index about a month ago.

From the price action, the $40,000 support is holding as buyers recoup above $40k. Bitcoin bulls have shown strength above the current support as the market reaches the high of $43,000. BTC price will be out of downward correction if buyers push Bitcoin above $47,000 high. This will signal the resumption of upside momentum. However, if BTC price faces rejection at the recent high, the selling pressure will resume.