Bitcoin was slightly lower on Monday as traders remained cautious about regulatory crackdowns from China and elsewhere.

The cryptocurrency was trading at about $43,000 at press time and is roughly flat over the past 24 hours. Analysts are monitoring blockchain data for signs of buyer accumulation, although it may be too early to tell if sellers have fully capitulated.

For now, it appears that some buyers have shifted their focus away from bitcoin and moved into decentralized finance (DeFi) tokens in the wake of China’s crackdown on cryptocurrency activities. For example, Messari data shows the PERP token initially spiked about 55% toward $17 on Monday, although the price settled at about $15 at press time. PERP is the utility token facilitating and incentivizing the decentralized governance of the Perpetual Protocol.

Analysts expect China’s crypto industry to phase out given the recent ban.

“I think OTC platforms that are operated from the big exchanges will close down,” said Bobby Lee, founder and CEO of the Ballet wallet service and former head of BTCC, once one of the biggest bitcoin exchanges in China in an interview with CoinDesk. “OTC” refers to over-the-counter trading, or off-exchange.

And on Monday, Ethereum mining pool SparkPool said it plans to suspend services for all its users by Sept. 30.

Investors pumped $95 million into digital asset products last week, more than double the prior week’s pace, according to a CoinShares weekly report.

With the headwinds that digital assets have faced recently, such as China’s ban, the inflows suggest that price declines may have been seen as buying opportunities, CoinDesk’s Lyllah Ledesma reported.

Flows into all crypto funds during the week ended Sept. 24 were the most since the $98 million in the week through Sept. 3, and brought total inflows over the last six weeks to $320 million.

Bitcoin saw the largest inflows of any crypto investment product with a total of $50 million, also the most in three weeks. 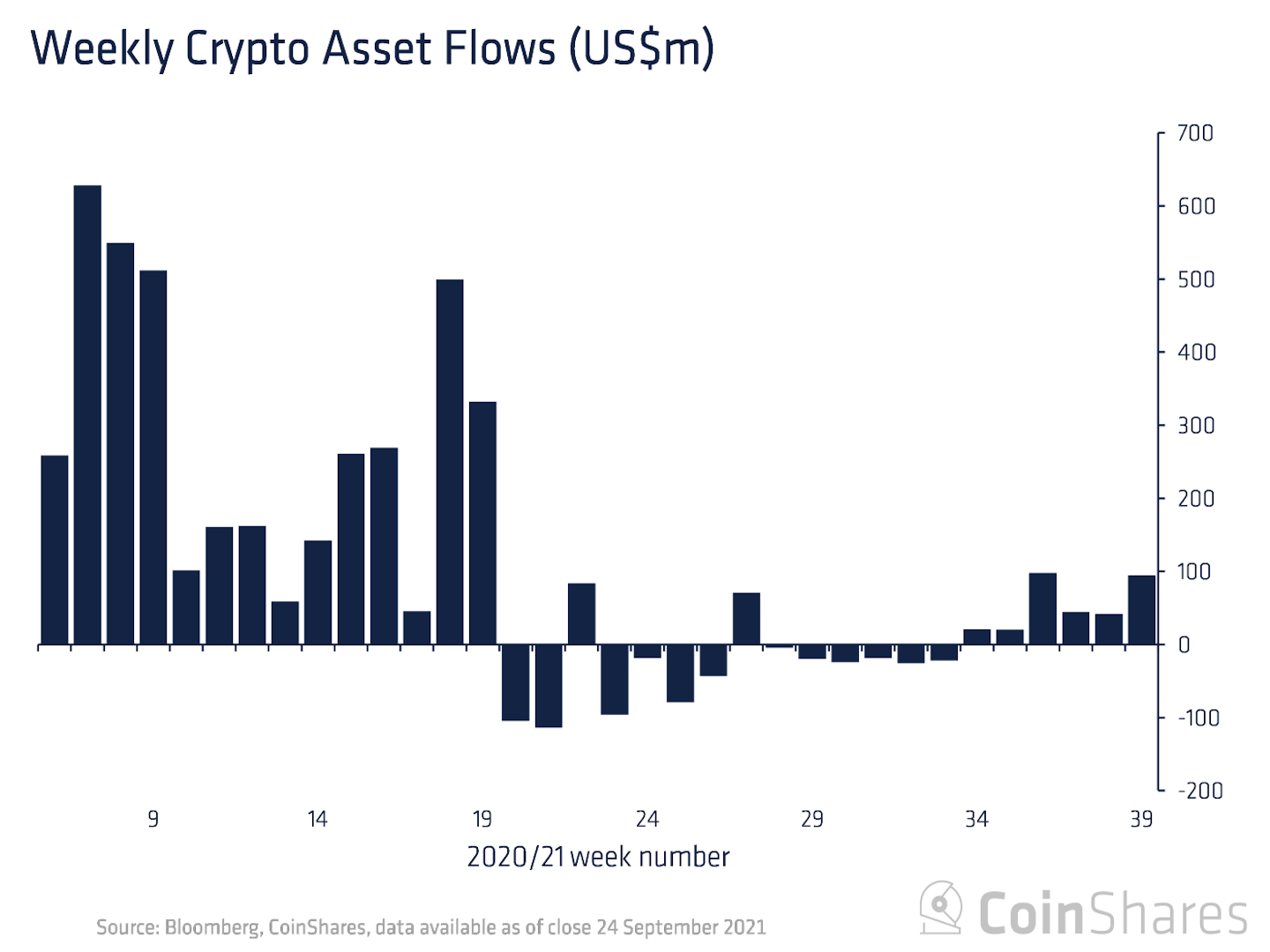 Analysts are questioning whether bitcoin holders can sustain enough buying power to support further price increases into the fourth quarter. Prices are now back near the cost basis for most short-term holders, similar to September 2020, which preceded a price rally.

This time, however, “the 50%+ correction in May resulted in a flushing out of many retail traders and investors, and thus interest in the [Bitcoin] protocol has waned since early 2021,” Glassnode wrote in a blog post.

About 58% of short-term holders are already experiencing losses (current BTC price below the acquired price), according to Glassnode data. The holders who entered over the past two months could decide to sell their BTC at a loss, which could drive prices lower, or accumulate more BTC in hopes of turning a profit.

The chart below shows the market-value-to-realized-value (MVRV) ratio, which measures BTC’s market capitalization relative to its realized market value. The current MVRV suggests that BTC is trading at roughly its fair value after the May sell-off.

Most digital assets in the CoinDesk 20 ended the day lower.