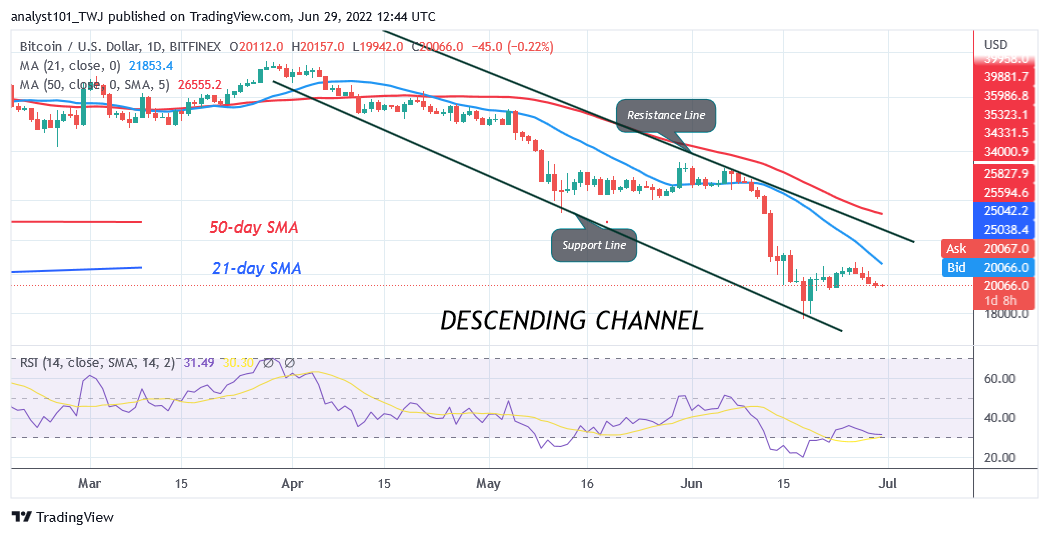 On June 26, BTC/USD faced rejection at the $22,000 resistance zone as it risks further decline to $17K. Today, Bitcoin has fallen to the low of $20, 0027 at the time of writing. There is a likelihood of a price rebound or a breakdown.

Bitcoin has fallen to $19,471 low as it risks further decline to $17K. On the upside, if the BTC price rebounds above the current support, the bullish momentum is capable of breaking the resistance levels of $21,675 and $23,010. The bullish momentum will extend to the high of $30,000.On the other hand, if the selling pressure persists; Bitcoin will fall and revisit the previous low of $17,605. It is at level 31 of the Relative Strength for period 14. It indicates that the largest cryptocurrency has reached the oversold region of the market.

Michael Saylor is the CEO of the Business intelligence firm, MicroStrategy.The business intelligence firm has now amassed 129,699 BTC at an average price of $30,644. According to CEO Michael Saylor. Microstrategy has completed Form 8-K filing with the United States Securities and Exchange Commission (SEC) indicating that it has acquired an additional 480 BTC. The 480 BTC is at an average price of roughly $20,817 which is totaling almost $10 million in cash. With the current purchase, MicroStrategy holds 129,699 BTC, making it the largest corporate holder of Bitcoin. The total holdings are valued at roughly $3.98 billion.

In the meantime, Bitcoin has lost the $20,000 psychological price level as it risks further decline to $17K. It is not clear if Bitcoin will revisit the previous low at $17,605. In the previous price action, the bulls bought the dips as Bitcoin traded above the $20,000 support.

68% of retail investor accounts lose money when trading CFDs with this provider.

Technicals and Macro Picture Suggest Bitcoin is Setting up for a Bounce – Blockchain News, Opinion, TV and Jobs