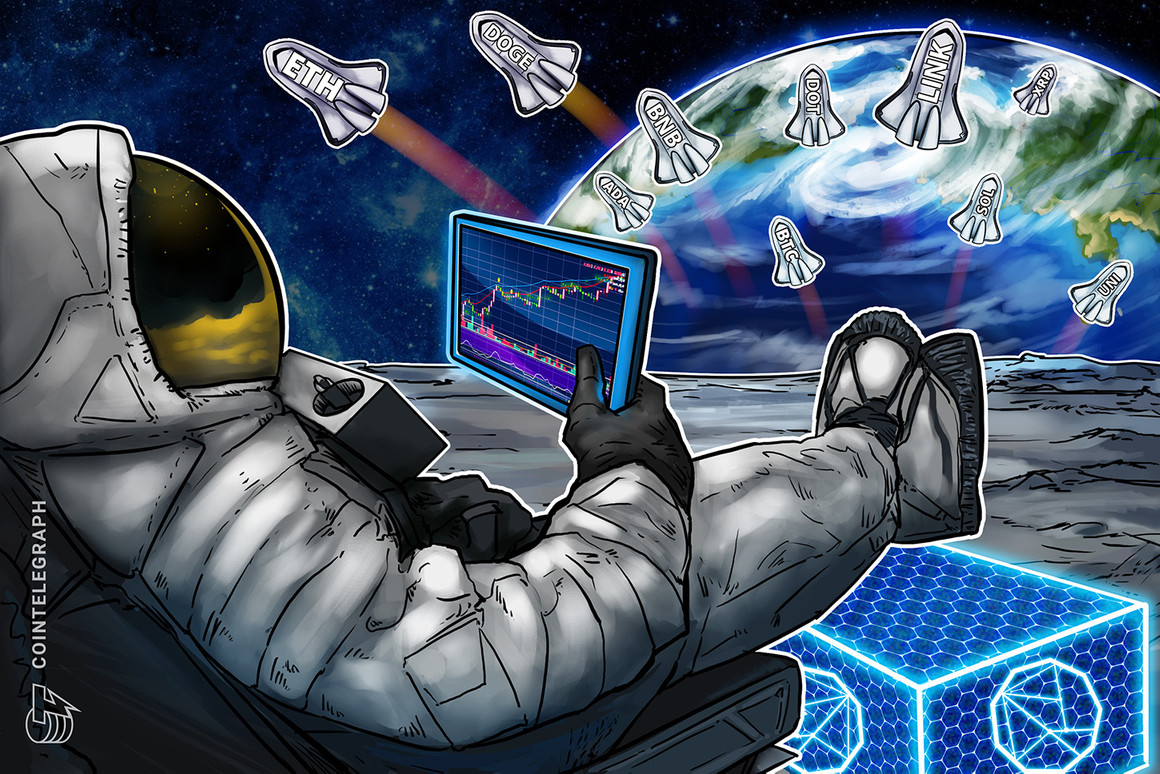 Bitcoin (BTC) finally broke above the $50,500 resistance and Ether (ETH) has risen above the $4,000 mark. This suggests that there is growing interest in cryptocurrencies and several legacy finance companies are initiating steps to tap into this increasing demand.

One of the world’s largest independent asset managers, Franklin Templeton, has posted fresh job applications for medium to senior-level positions in crypto trading and research, according to Linkedin job postings.

Meanwhile, in Japan, financial conglomerate SBI Holdings is planning to set up one of the first crypto funds in the country by the end of November. Tomoya Asakura, the director and senior managing executive officer at SBI, said that the launch of a second fund will be explored depending on the success of the first one.

While crypto traders are cheering the recent run-up in several altcoins, JPMorgan analysts have warned their clients that the altcoin rally and nonfungible tokens (NFT) are getting frothy.

The analysts said that the altcoins share of the crypto market trading surged from 22% at the beginning of August, to 33%, which is high compared to historical standards. They believe the reason is “froth and retail investor ‘mania’ rather than a reflection of a structural uptrend.”

Could Bitcoin sustain above $50,500 and resume its uptrend or will altcoins remain in focus? Let’s study the charts of the top-10 cryptocurrencies to find out.

The bears successfully defended the $50,500 resistance on Sep. 2 but they could not pull and sustain the price back below the downtrend line. This could have attracted buying from the bulls who have pushed Bitcoin above $50,500 today.

If buyers sustain the price above $50,500, the BTC/USDT pair could rally to $60,000. This level may again act as a stiff resistance but if bulls can thrust the price above it, the pair could challenge the all-time high at $64,854.

If bulls drive the relative strength index (RSI) above the downtrend line, it will invalidate the negative divergence. That along with the upsloping 20-day exponential moving average ($47,584) indicate that the path of least resistance is to the upside.

This bullish view will invalidate if the price turns down from the current level and breaks below the 200-day simple moving average ($46,083). That could pull the price down to $42,451.67.

Ether picked up momentum after breaking above $3,377.89 and hit the $4,000 mark today. If bulls sustain the price above this psychological level, the biggest altcoin could challenge the all-time high at $4,372.72.

The upsloping 20-day EMA ($3,344) and the RSI in the overbought zone suggest that bulls are in control. If buyers push the price above $4,372.72, the ETH/USDT pair could start its journey toward the critical level at $5,000.

A strong rebound off this support will suggest that the sentiment remains bullish. The buyers will then try to resume the up-move. Conversely, a break and close below the 20-day EMA will be the first sign that bulls may be losing their grip.

Cardano (ADA) broke above the $3 mark on Sep. 2 but the bulls could not sustain the higher levels as seen from the long wick on the day’s candlestick. Although the price dipped back below $2.97 today, the bulls bought the dip and are again trying to drive the price above $3.

A breakout and close above $3.10 will signal the resumption of the uptrend. The ADA/USDT pair could then rally to $3.50. The 20-day EMA ($2.58) favors the bulls but the negative divergence on the RSI indicates that the bullish momentum may be weakening.

If bulls fail to drive the price above the overhead resistance, the pair may drop to the 20-day EMA. This is an important level for the bulls to defend. A strong rebound off it will suggest that the sentiment remains positive.

Conversely, a break below the 20-day EMA may pull the price to the breakout level at $2.47. A break below this support could start a deeper correction.

Binance Coin (BNB) has been trading between the 20-day EMA ($456) and the overhead resistance at $518.90. The long wick on the Sep. 2 candlestick suggests that bears are selling above $500 but the positive sign is that bulls are not giving up much ground.

The buyers will again try to push and sustain the price above $518.90. If they manage to do that, the BNB/USDT pair could pick up momentum and rally to $600. This psychological level may act as a resistance but if bulls clear this hurdle, the rally may extend to $680.

Conversely, if the price turns down from the overhead resistance and dips below the 20-day EMA, the pair may slide to $433. A break below this level will suggest that bears have overpowered the bulls. The pair may then decline to the 200-day SMA ($375).

If bulls sustain the price above the downtrend line, the XRP/USDT pair could rally to $1.35. This level may act as a resistance and if the price turns down from it, the pair may trade between $1.05 and $1.35 for a few days.

The bears attempted to stall Solana’s (SOL) uptrend at $130 but the bulls were in no mood to relent. The buyers did not allow the price to break below the psychological support at $100.

Buying resumed on Sep. 2 and the bulls have extended the SOL/USDT pair to a new all-time high today. Vertical rallies are rarely sustainable and they usually result in sharp declines. The RSI above 88 also indicates the pair is overextended in the short term.

Dogecoin (DOGE) broke above the 20-day EMA ($0.28) on Sept. 1 and bulls pushed the price above the downtrend line of the falling wedge pattern on Sept. 2. However, the long wick on the day’s candlestick showed that bears were selling at higher levels.

The DOGE/USDT pair has bounced off the 20-day EMA and the bulls have pushed the price above the wedge. If buyers sustain the price above $0.31, the pair could rally to $0.35. This level is likely to act as a strong resistance.

If the price turns down from $0.35, the pair may again drop to the 20-day EMA. A strong rebound off it will suggest that the sentiment is positive. A breakout and close above $0.35 could clear the path for an up-move to $0.45.

On the other hand, if the price turns down and breaks below the 20-day EMA, the pair may drop to the support line of the wedge.

Polkadot (DOT) has been sustaining above the breakout level at $28.60 for the past three days, indicating the start of a new uptrend. The rising moving averages and the RSI in the overbought territory indicate advantage to buyers.

On the other hand, if the price turns down from the current level, the price may retest the breakout level at $28.60. If bulls flip this level into support, it may act as a launchpad for the next leg of the up-move.

A break and close below the 20-day EMA ($27.12) will be the first sign that the current breakout may have been a bull trap.

Related: How to prepare for the end of the bull run, Part 1: Timing

Uniswap’s (UNI) up-move turned down from $31.41 on Sept. 2, suggesting that the bears have not thrown in the towel yet. The price action of the past few days has formed a negative divergence on the RSI, indicating that the bullish momentum may be weakening.

Alternatively, if bears sink the price below the moving averages, the pair may drop to $25 and remain range-bound for a few more days. A break and close below the $25 to $23.45 support zone will signal that bears are back in the game.

Chainlink (LINK) had been range-bound between $24 and $30 for the past few days. The bulls pushed the price above the overhead resistance on Sept. 2 but they could not sustain the higher levels.

The bulls again bought the dip today and have propelled the price above the overhead resistance. If buyers sustain the price above $30, the LINK/USDT pair could rally to $36 and if that level is crossed, the up-move may reach $43.50, which is the May 19 intraday high.

The 20-day EMA ($26.99) has started to turn up and the RSI is in the positive territory, indicating that buyers have the upper hand. Contrary to this assumption, if the price turns down and breaks below $30, it will suggest that the range-bound action may continue for a few more days.